The PlayStation Vita is an excellent portable console with amazing potential; modding or ‘jailbreaking’ serves only to help realize its potential as a versatile device with a huge library of games from the original PSX and PSP, as well as its own selection of niche titles that can only be found on the PS Vita. The current ‘jailbreak’ for the PS Vita is HENkaku by TheOfficialFlow; once installed, you’ll be able to enable the installation of homebrew applications and plugins which will grant you additional features and customisation options. HENkaku itself will install the “HENkaku Settings” menu which has a few neat features on its own: 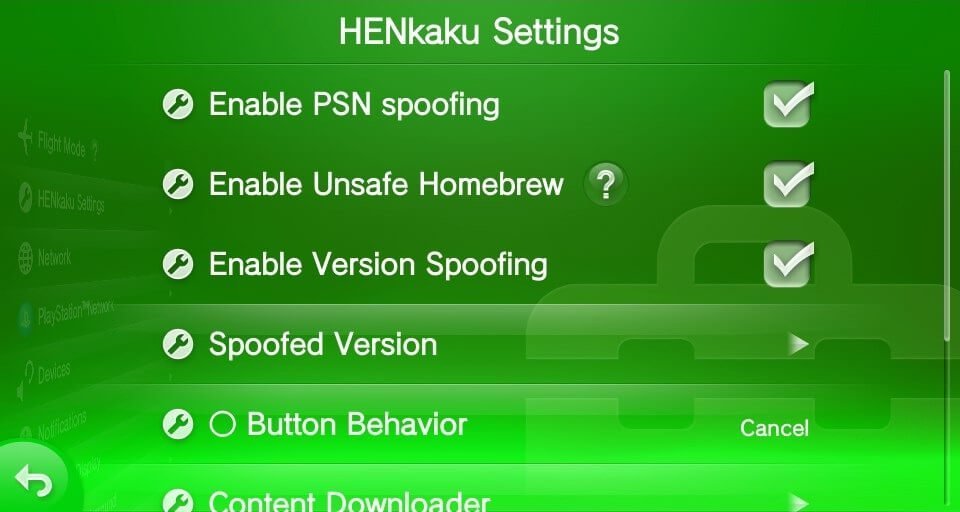 The HENkaku exploit was originally released for firmware 3.60 but has since been ported to newer firmwares. Every PS Vita can be hacked with the appropriate exploit method. Below is a small list of PS Vita hacking methods and the firmware they require: 3.60 is still considered the ‘golden firmware’ due to having the highest compatibility with homebrew. and also having access to permanent custom firmware with the Ensō hack. Without Ensō, HENkaku will need to be reinstalled after every reboot. Even if your PS Vita is 3.65+, you can easily downgrade your firmware after modding your console with the Modoru homebrew app. If your firmware is below 3.60, Block Updates via DNS to safely update to 3.60 over wi-fi or use Qcma to offline update to the firmware of your choice

What Can You Do with a Hacked Vita?

Adrenaline by TheOfficialFlow is a homebrew application that unlocks the built in PSP emulator (ePSP) on the PlayStation Vita. This app essentially turns your Vita into a PSP that is compatible with nearly all PSP and PSX games as well as PSP homebrew. Adrenaline is a great addition to any hacked PS Vita and is one of the main reasons to justify hacking a PS Vita.

Currently the PS Vita is considered to be the best handheld in terms of emulation capabilities, completely blowing the 3DS out of the water and holds an advantage over the Nintendo Switch due to a more developed homebrew scene. In addition to playing PSP and PSX games at full speed, the PS Vita can easily run a variety of games for Super Nintendo, Sega Genesis, Game Boy Advance and more through RetroArch as well as some homebrew standalone emulators. 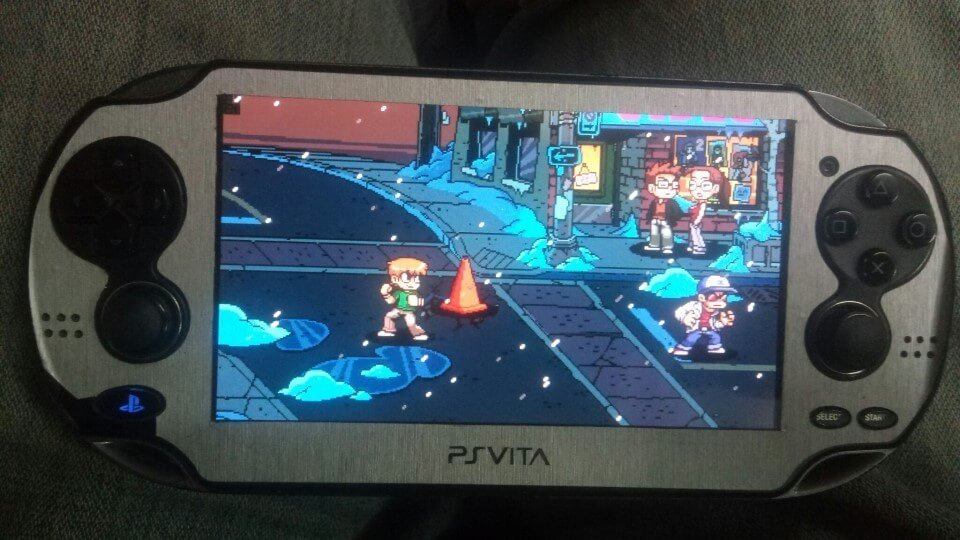 The PS Vita can stream gameplay from your PC using the Moonlight application. Moonlight is a project to port the Nvidia GameStream technology to various devices such as iOS, Android and ChromeOS. The PS Vita version works especially well, allowing you to play PC games on your PS Vita with very little setup involved. The PS Vita will function as a controller for your PC whilst displaying the gameplay on the screen, meaning you can play many PC games (and emulators!) on the PS Vita that otherwise wouldn’t be possible. (Image is Moonlight streaming Scott Pilgrim vs The World: The Game running on RPCS3, courtesy of u/Sanjay–jurt from Reddit) 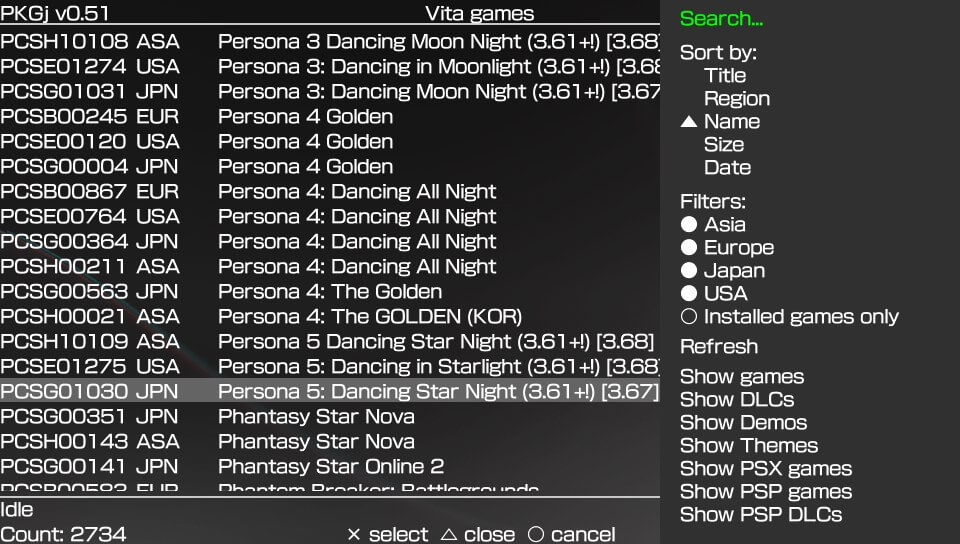 Most likely the number one reason why people jailbreak and hack their consoles, to create and play backup games. Dumping your game cards is a very straightforward procedure on the PS Vita thanks to the NoNpDrm plugin which creates license files for any game card that is launched while the plugin is active. This mean that backup games can be downloaded, shared and played on any homebrew enabled PS Vita as long as they have the NoNpDrm plugin installed. The ref00d plugin is also invaluable in that it lets you play games that have higher firmware requirements, meaning that you can stay on the 3.60 firmware and still have access to the entire PS Vita library. The PKGj homebrew application allows you to download PS Vita, PSP and PSX content directly to your Vita without the need for a PC. 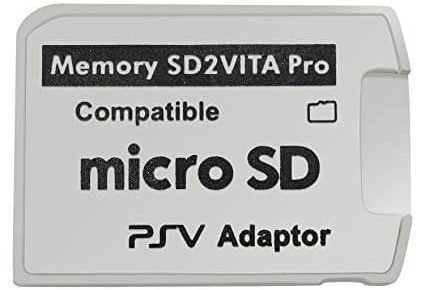 You can expand the PS Vita storage options with a MicroSD card using the SD2Vita adaptor with the StorageMgr plugin. The SD2Vita is placed in the game card slot. This means you wont be forced to rely on the expensive proprietary memory cards; a 128GB MicroSD cost approximately half as much a 16GB Sony Memory Card. This is perfect if you plan to install many games onto your PS Vita. 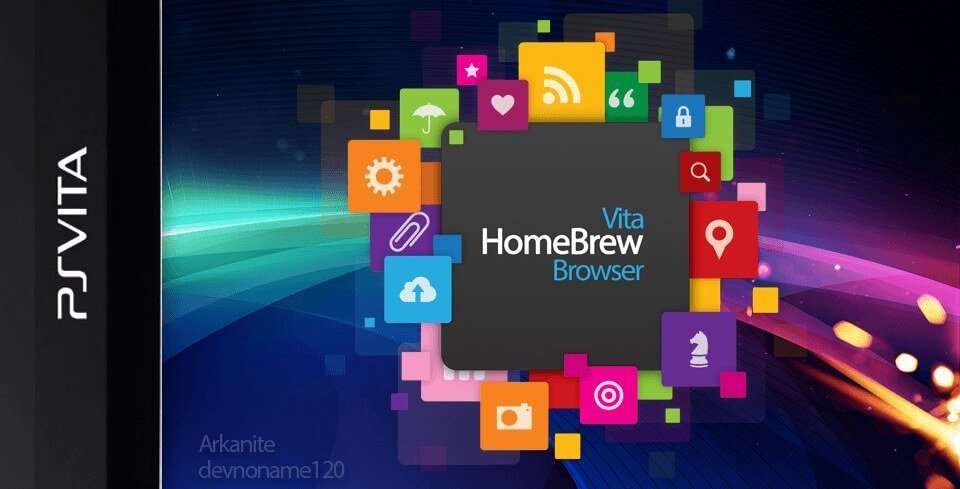 In addition to those already mentioned, the PS Vita has a large homebrew library that is constantly growing. The majority of these applications can be found in the Vita Homebrew Browser, a repository for homebrew apps that uses the Rinnegatamante’s VitaDB as a source. You can also found a multitude of homebrew games and ports such as Doom and Quake.

In addition to homebrew application, hacking your PS Vita will also give you access to powerful plugins.  Autoplugin is a collection of plugins that can easily be installed to your PS Vita without a PC, the application is regularly updated with new and useful plugins.In contrast to homebrew apps; plugins run passively in the background, allowing you to make tweaks to your PS Vita that wouldn’t normally be possible such as disabling the rear touchscreen panel, enabling PS3/4 controller support for games, cheat engines, Vita to PC streaming and much more.

Can I get free games?

You can download backup games using PKGj or NoPayStation. You will need the NoNpDrm and ref00d plugins to play downloaded games on any firmware.

Is it safe to update my PS Vita after installing HENkaku?

There is no reason to update your firmware after installing HENkaku. Block Updates via DNS to safely update to 3.60 over wi-fi or use Qcma to offline update if you absolutely must.

Can I get banned for hacking my PS Vita?

There have never been any reported bans for PS Vita consoles running HENkaku.

Is custom firmware safe for my Vita?

It is very difficult to brick your PS Vita if you follow instructions carefully, keep your PS Vita charged when making any major changes.

Can I downgrade my PS Vita firmware?

You can download your firmware using Modoru 2.0 if you have custom firmware installed already.

Can I log into PSN and go online with custom firmware?

You can go online with CFW, enable PSN spoofing and spoof your firmware version in the [Settings] -> [HENkaku Settings] menu.

I’m on x.xx firmware, can I hack my Vita?

Follow this table to know which method to use to hack your PS Vita according to your firmware. Block Updates via DNS and update over Wi-Fi if your firmware is below 3.60. Every firmware version can be hacked with an appropriate exploit.